In The Great Gatsby, Daisy Buchanan’s friend Jordan Baker announces at one point during a conversation that, “Life starts all over again when it gets crisp in the fall.” Though Jordan isn’t a very likeable character, I’ve always loved that quote. Because life does seem to start over again in the fall, doesn’t it? As much as I cherish summer, it’s nice in September to step into a pair of new fall shoes, burrow down under the duvet, and tackle a few stalled projects.

This fall happens to be really special for me. Though I will definitely pick up a few projects I put aside—like my Spanish lessons!—I’ll be spending a lot of time focusing on both press and events related to my seventh Bailey Weggins mystery, Even If It Kills Her, which debuts in October. I’m not really sure how I let so much time pass before I set down to pen this Bailey book. I wrote a couple of stand alone psychological thrillers (including The Secrets You Keep, which came out in April), I edited the Mystery Writers of America Cookbook, and then suddenly five whole years had gone by.

But the book is finally coming out, and I’m really excited. In her pre-publication review, Michele Leber of Booklist wrote: “White builds suspense masterfully…and this seventh in the series has the makings of another hit. Bailey is a smart, sexy sleuth, and her exploits make for thoroughly entertaining reading.”

I hope you’ll pre-order as soon as possible. (Pre-ordering makes a huge difference for an author.) And please let me know what you think.

Pre-order EVEN IF IT KILLS HER

Of course, summer isn’t over yet. I hope you enjoy the last few weeks of the season and perhaps even try my favorite peach recipe, below.

What I’ve Been Reading:

WHAT’S BECOME OF HER by Deb Caletti. I loved her first adult novel, HE’S GONE, with its terrific characterizations and haunting plot. This book is a nuanced, somewhat quiet psychological thriller, but I really enjoyed it. She’s a beautiful writer who digs deep with her characters. I was waiting for a twist at the end and it came with a bang, though it wasn’t at all what I expected.

THE MARSH KING’S DAUGHTER by Karen Dionne. There was a lot of prepublication buzz about this book so I ordered it mainly out of curiosity. I’m only forty pages in but really liking it so far. A fascinating protagonist and gripping story. 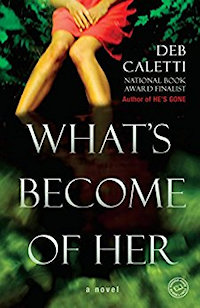 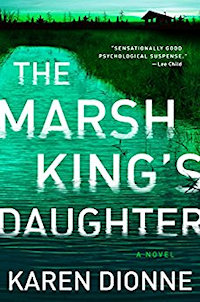 Fresh peaches are still selling at my local farm stand and at this time of year I love making a peach dessert I learned from a former food editor of mine when I was in the magazine business. Slice off chunks of peaches, leaving skin on. Lay out on a baking sheet. Dab a little dark brown sugar onto the top of each piece and then broil, skin side down, until the peaches start to caramelize, only a couple of minutes. Watch carefully. Top each with a teaspoon of mascarpone cheese. This dish is to die for. When I’m being really wicked, I serve with a plate of brownies.