I’ve still been on the road a lot lately, and though there’ve been some mishaps (like a Delta flight that was over five hours late and nearly resulted in me being late for the speech I was giving), it’s been a truly rewarding experience overall. 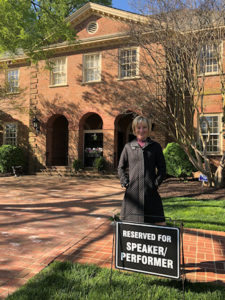 On May 2, I spoke to about 400 members of the Tuckahoe Woman’s Club in Richmond, Virginia, and I finished that week as a featured author at the Junior League of Morristown N.J.’s annual author luncheon.

Both events were really special. In Richmond I was put up at the fantastic Jefferson Hotel, given my own special parking space, and offered coffee punch with ice cream the morning of the speech (what a yummy way to start the day). In New Jersey, the graciousness continued full tilt.

What I enjoy most of all about touring is having the chance to connect with readers and hear what’s on their (your!) minds. At the New Jersey event, one audience member asked the three authors if we ever read the online reviews of our books, and I had to admit that I do take a look, though usually not right when a book is published. I try to dismiss any hateful reviews (have those people never heard of karma?), but I’ve definitely learned from hearing thoughtful comments that point to something I could be doing better as an author. So please keep them coming!

My next novel comes out in March ’19, and though that seems like forever, I know the time will fly. No cover yet (or even a final title), but I’ve been reviewing my wonderful editor Laura’s notes and making some minor tweaks. It really helps, I find, to have those weeks between when you submit a book to your editor and when you get the notes back. You gain distance, and you see what might need fixing or pumping up. Thanks to that fresh perspective, I just ended up adding a chilling scene to the book, which I love!! I won’t tell you what it is because, hey, I want you to be a little terrified when you read it! (And frankly, it terrified me as I was writing it.)

I hope you’ll watch for news of the book and also the cover reveal, which will be happening later this summer or early fall.

And if you haven’t had the chance yet, I’d love you to check out one of my most recent mystery/thrillers, The Secrets You Keep or Even If It Kills Her. Or both!

Until next month,
Kate White

The Woman in the Window by A.J. Finn. You may have heard the buzz months ago about this monster worldwide bestseller. Did you read it? For some reason I didn’t get around to it until last week, and wow, I thought it was fabulous. Totally gripping, and the writing is gorgeous. Hey, A.J. (aka Daniel Mallory), I’m stealing your “grass green eyes” line, for my next book, okay?

I’ll Be Gone in the Dark by Michelle McNamara. This is a totally compelling true-crime account of a journalist’s attempt to figure out the identity of the Golden State Killer, who terrorized California for over a decade. Tragically, Michelle died in 2016 and never got to see the killer unmasked. But, of course, thanks to DNA evidence, police now believe they have their man. 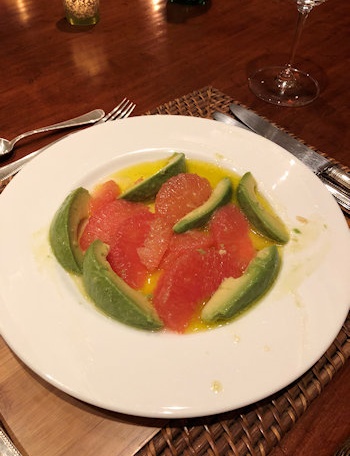 This fantastic salad of avocado and grapefruit with a mustard and lemon vinaigrette (right) comes from Ina Garten’s wonderful cookbook Barefoot in Paris: Easy French Foods You Can Make at Home.

I find this so perfect for this time of year. It’s luscious but also light enough for the kind of meals we serve in spring and early summer. A great starter.