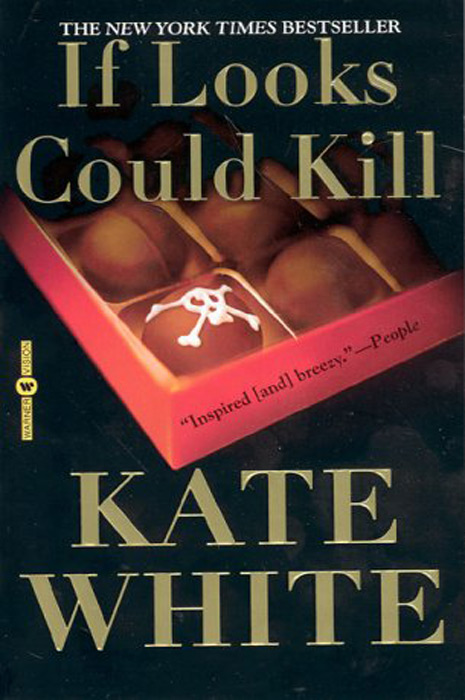 In the first book of the Bailey Weggins mystery series, true crime writer Bailey drops by the apartment of her boss, Cat Jones, only to find the family’s young nanny dead from a poison chocolate truffle. Was Cat actually the intended victim?  Bailey sets out to find the truth, and soon realizes that it’s more complicated–and deadly–than she ever imagined. If Look Could Kill was picked as Kelly Ripa’s first book club choice and shot to #1 on Amazon.

Meet Bailey Weggins, the thirtysomething, single-again true-crime writer for a leading Manhattan women’s magazine. Smart and savvy, she’s got a sixth sense when it comes to seeing the truth in a story—especially if it’s murder. Bailey’s in bed with her commitment-challenged lover K.C. when she gets a frantic call from her high-maintenance boss at Gloss magazine. Grabbing coffee and a cab outside her Greenwich Village apartment—the consolation prize in her divorce settlement—Bailey reluctantly heads uptown. At Cat Jones’s Upper East Side town house, she finds something that seriously clashes with the chic décor: the dead body of the family’s live-in nanny.

As Bailey—unofficially—delves into the murdered girl’s past, she finds no shortage of A-list suspects. But when a startling discovery suggests that Cat may have been the intended victim, Bailey is suddenly up to her bedhead in a high-profile investigation that’s perfect fodder for a tabloid headline: Is Someone Trying to Kill the Editors of Women’s Magazines?

The spotlight’s on New York’s glitzy media world as Bailey interviews back-stabbing editors, straying husbands, and one sexy, six-foot-two psychologist who could make her decide to kick K.C. to the curb. Sporting her pair of red sling-backs and armed with the investigative skills she’s honed as a true-crime reporter, she sets out on a search that takes her from Manhattan’s exclusive Carnegie-Hill area—the nanny heartland of America—to the ritzy weekend estates of Pennsylvania and Connecticut. Bailey will need all her street smarts and some lightning-fast detective work to catch a killer who could end up deleting her name from the masthead for good.

Praise for If Looks Could Kill

“The real fun here is the casual cruelty with which White reveals the malicious wiles of arrogant editors.” — THE NEW YORK TIMES BOOK REVIEW

“It’s like devouring a box of chocolates.” — LOS ANGELES TIMES

“White is scathingly observant, capturing the mood at a glossy magazine with a verisimilitude some of her peers must recognize.” — NEW YORK TIMES

“White shows she has plot-spinning skills and a self-mocking sense of humor… [Her] knowing references add insider zing to a charmingly old-fashioned detective yarn.” — PEOPLE