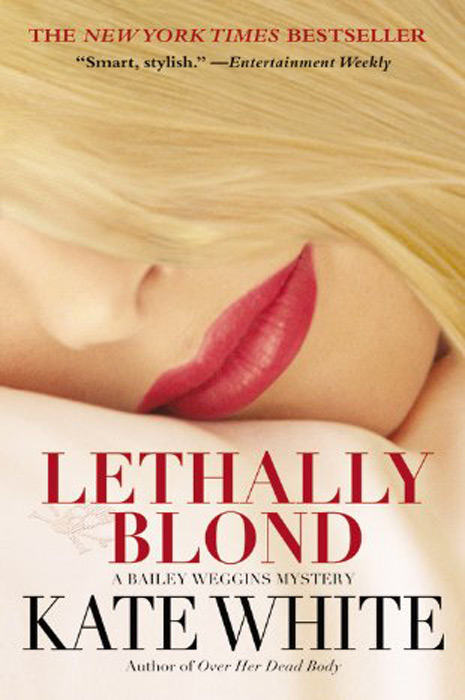 “Smokin’ hot… as much fun as your favorite celeb-studded tabloid.” — TOWN & COUNTRY

Whenever a celebrity hurls a phone, totals a car, or murders a spouse, crime journalist Bailey Weggins is there to cover it for the gossip magazine Buzz. Now, the much-hyped TV show Morgue has begun shooting in Manhattan, and just as Bailey starts reminiscing about her fling with the show’s gorgeous star, Chris Wickersham, he phones her. But Chris isn’t calling to rekindle their flame. His friend Tom, who plays a small role on the show, has gone missing, and while nobody seems to be alarmed, Chris can’t believe his friend would just take off before the show premieres.

When Bailey starts to investigate Tom’s disappearance as a favor to Chris, she soon realizes that there is more going on than meets the eye. Delving deeper into the glamorous yet crazy world of TV, she finds herself in the middle of a killer story—literally—and also in the line of fire. As the missing-person case gets hotter, so does the action between the sheets for Bailey—especially the moment her crush, Beau Regan, hits town again.

When mysterious phone calls turn ominous and it’s clear that she’s being stalked, Bailey becomes determined to solve the case in less time than the length of a Hollywood marriage. Unless she unearths the truth, Bailey could become the inspiration for Morgue‘s next episode.

“Sex, drugs, celebrities, murder…Weggins can’t resist. You won’t be able to either.” — REDBOOK

“…By writing every day, [White] has managed to publish five chick-lit-ish mysteries that would make Carolyn Keene proud.” — USA TODAY

“White has the ideal background to write about her heroine, Bailey Weggins. Weggins may get involved in more dangerous adventures than the average journalist, but that’s all just part of the fun.” — CHICAGO TRIBUNE

“As a modern-day caper novelist, Kate White reminds us that Nancy Drew is alive, well, and possibly living in New York.” — GOTHAMIST.COM