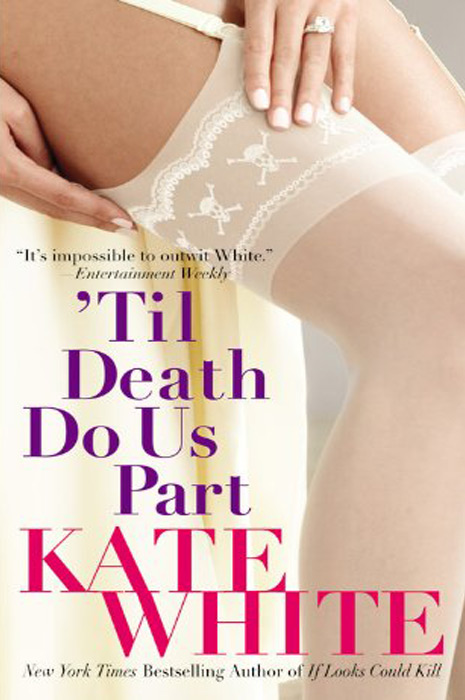 ‘Till Death Do Us Part

True-crime writer and sometime-sleuth Bailey Weggins took the media and mystery worlds by storm in Kate White’s sexy and suspenseful debut novel, If Looks Could Kill, a New York Times bestseller and a Reading With Ripa Book Club selection. In Bailey’s latest outing, she takes the plunge into a world of designer wedding dresses, domestic divas, and deadly nuptial doings.

When she gets a call from Ashley Hanes on a frigid January night, Bailey’s ready to tell her she’s not pulling any of her Gloss magazine strings to get Ashley into a designer sample sale. But the Connecticut trust-fund baby isn’t looking for fashion favors; she wants to rehash the Cross/Slavin wedding. It turns out that Peyton Cross—the Vera Wang-attired bride and Martha Stewart wannabe—is once again the talk of the town. Two of her bridesmaids have recently died in freak accidents, and Ashley’s terrified she’ll be next.

Bailey’s interest is definitely piqued—she was Peyton’s college roommate and a bridesmaid in her wedding as well. Leaving her latest boyfriend behind in Manhattan, Bailey bundles up for the cold, scenic drive to Ivy Hill Farm in Greenwich, Connecticut, home of Peyton’s burgeoning catering and gourmet-food business. She’s barely begun asking questions when Ashley becomes Bridesmaid Casualty #3.

After Bailey is attacked by an assailant in a cashmere coat, she realizes she’s been targeted by a well-heeled killer who knows how to dress for the weather—which narrows the list of suspects to most of the population of Greenwich, including Peyton’s employees and intimate friends. Before Bailey knows it, she is following a dangerous trail of clues that will take her from the elegant suburbs of Connecticut to New York’s trendy Lower East Side to a fabulous oceanfront hotel room in Miami.

With the clock ticking and a well-concealed murderer vowing to get her out of the picture, Bailey could become the headline of the next true-crime story: “Four Funerals and a Wedding.”

Praise for ‘Till Death Do Us Part

“The third, cleverly plotted Bailey Weggins mystery from Cosmopolitan editor-in-chief White provides a juicy inside look at the well-to-do matrons of tony Greenwich, Conn. White keeps everything light, but she also sustains a real sense of mystery with less than obvious motives and a positively suspenseful denouement.” — PUBLISHERS WEEKLY

“White is adept at describing the land of trophy wives, mansions and lemon tarts. And her slick, readable tale is as fun as nabbing a couture gown at a sample sale. A-.” — ENTERTAINMENT WEEKLY

“There’s plenty to be entertained by here… Bailey is as endearing as ever, proving again that in mysteries, it’s not so much what happens as who it happens to that matters.” — BOOKLIST

“An entertaining, well-written story that surpasses most of what her competition has produced.” — REVIEWINGTHEEVIDENCE.COM

“Kate White has a real winner in ‘Til Death Do Us Part…. The ending of the book is heart-pounding drama at its best, as author Kate White shows us just how a good murder mystery should be written. Be prepared to keep reading. You won’t be able to put this one down for long.” — SHELF LIFE

“White takes readers deep into the fascinating world of the rich and famous as her protagonist stays one step ahead of the grim reaper to solve murders without obvious motives… Suspense, chills and more than one spill make ‘Til Death Do Us Part a hot page-turner. White proves she is more than just a two-book novelist.” — BUSINESSKNOWHOW.COM

“Ever-present suspense, amid the drama of Bailey’s life, creates a fascinating plot that should garner White new fans. As the tension—and a succession of accidents for Bailey—continues to build, this novel becomes a captivating, white-knuckled ride.” — ROMANTIC TIMES